The history of the John Harris-Simon Cameron Mansion is one of change in both its architecture and ownership. The Mansion has undergone numerous additions and significant renovations since it was first constructed in 1766. It has had no fewer than eight owners before the Society first called it home in 1941. In 1976 the Mansion was designated a National Historic Landmark. In 2016, the 250th anniversary of the house, a significant and award-winning restoration took place, thanks to financial aid from government and private agencies, institutions, and individuals and to many in-kind goods and services. All of the work was done by the finest craftsmen in the area. This work continues into the future as rooms are re-decorated and furnished with objects from the Society’s substantial holdings.

The Historical Society of Dauphin County offers tours of the Mansion, and you can also rent the public rooms of the Mansion for personal or business events. 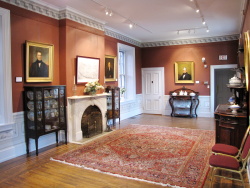 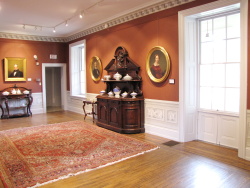 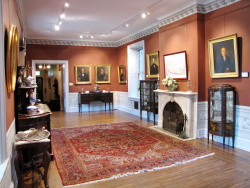 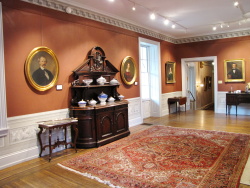 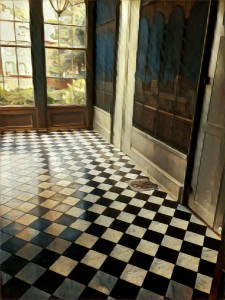 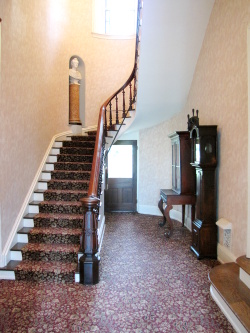 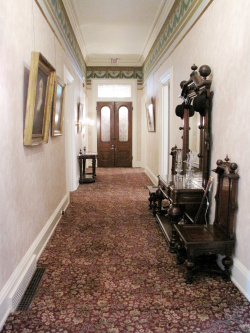 A BRIEF HISTORY OF THE HARRIS-CAMERON MANSION

The story of the Mansion begins in the early 1700s with the arrival of John Harris, Sr., the first European immigrant to this area. John, Sr. was an associate of the Penn family, and he received a land grant as an inducement to come here. The Penns wanted Harris to establish good relations with the local Indians and to facilitate the settlement of the central and western portions of Penn’s colony.

Upon his arrival, Harris built a house and trading post on the bank of the river in the area where the large, arched railroad bridge is today. He was successful in establishing good relations with the local tribe. In a few years, as more settlers began to arrive, Harris started to operate a ferry service to aid travelers during times of high water levels in the river. This was the origin of the Harrisburg area as the crossroads of the state.

John Harris, Sr. continued to operate his businesses successfully until his death in 1748. He is buried across the street from the Mansion in the small, cast iron fenced area.

Upon his father’s death, John Harris, Jr. inherited his businesses and continued to operate them with success. About 1766, after the end of the French and Indian War, John, Jr. decided that it was about time for his family to have a more substantial house than the one that his father had built. The old home’s location by the river had meant that the family had to leave during the periodic flooding. From this experience, John, Jr. knew that the river had never reached the top of a certain rise of ground even during the worst floods. So he chose the current site and had the front section of the house built with locally quarried limestone.

John, Jr. lived until 1791, and upon his death the ownership of the house passed to his sons, first to David and then to Robert in 1805. Robert lived in the Mansion with his family until 1835, when he sold the house to local attorney Thomas Elder.

It was during this time period, in the early 1800s, that the rear wing was added to the house. No documentation is known to exist to tell whether it was added by Robert Harris or perhaps by Thomas Elder before he assumed residence. Prints and maps of Harrisburg made after 1840 show the house with the extension.

The Elder family lived in the Mansion until Thomas’ death in 1853, and the home was sold to the Reverend Beverly Waugh. Rev. Waugh and his wife Sarah turned the house into the Pennsylvania Female College, a school for young ladies. The year 1861 was devastating for the Pennsylvania Female College. There was the social turmoil of the beginning of the Civil War, and near the end of the year Reverend Waugh died. This combination of events forced the school into bankruptcy.

It was at this time that a member of the school’s Board of Directors, Simon Cameron, saw an opportunity for himself. Cameron was born into a poor family in Lancaster County in 1799. Through hard work, shrewd investments, and some said, unethical business practices, he had accumulated a considerable fortune by 1862. However, he is remembered most for his political activities.

Beginning in the 1840s, Cameron served a total of about 20 years in the U.S. Senate in non-consecutive terms. By 1862, he had resigned the office of Secretary of War, an appointment he had received in recognition of his instrumental support of Abraham Lincoln’s election as President. Cameron’s tenure at the War Department was marked with controversy and numerous scandals involving fraudulent supply contracts. To help avoid continuing political repercussions, Cameron was appointed as Minister (Ambassador) to Russia. This was an important post during the Civil War since the Czar favored the Federal cause while England and France had greater sympathy for the Confederacy.

Having made an offer of $8,000 to the executor of Rev. Waugh’s estate for the Harris Mansion, Cameron left for Russia. He traveled throughout Europe and stopped in England, France, Italy and the German states. While making his way to Russia, Cameron was shopping for furnishings for his new house. In the parlor are two 14-foot tall pier mirrors and mirrors above the fireplaces which came from France. The fireplace mantles are hand-carved Italian marble, and the alcove window glass is from Bavaria.

Cameron disliked being politically isolated in Russia, so he returned to the United States and resigned the post in 1863. After finalizing the purchase of the house, Cameron set out to transform the old house into the Victorian Italianate style so popular at that time. He hoped it would be suitably impressive to his business and political associates. Cameron added a solarium, walkway, butler’s pantry, and grand staircase. He also had the floor lowered 3 feet into the basement in the front section of the house because the 11-foot ceilings in the parlor could not accommodate his new 14-foot mirrors.

Simon Cameron lived to the age of 90, and upon his death in 1889, the house passed to his daughter, Margaretta. She was the widow of Richard Haldeman, a local newspaper publisher and Congressman. With her passing in 1915, the house was inherited by her son, Richard. Haldeman redecorated, modernized and made the last addition to the house, the West Alcove, with its spectacular Art Deco bathroom. He was the last of the Cameron family to live at the Mansion. He died in 1933. His sister Elizabeth Wright donated the house and other family items to the Historical Society in 1941.